Be the first to review this product
Example
Product Code: 2.9
In stock
SKU:
4278
Skip to the end of the images gallery 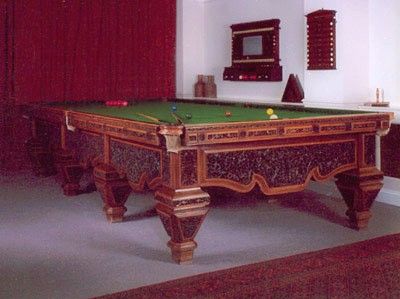 Skip to the beginning of the images gallery
About this Product
Heavily carved Full-Size Snooker Table by George Wright. This table was believed to have been originally made for the Shah of Pursia in 1850, extremely decorative carvings depicting serpents, dragons, lions, monkeys and other figures, manufactured in solid walnut. The table was believed to have been put on display at the Great Exhibition when the order was cancelled by the Shah it was subsequently purchased by Queen Victoria for Sandringham Hall.
You may also like
Unit 7, Newnham Road, Newnham, Nr Baldock, Herts, SG7 5JX, UK