The History of Snooker

The History of Snooker

Posted By Editor at Hamilton Billiards 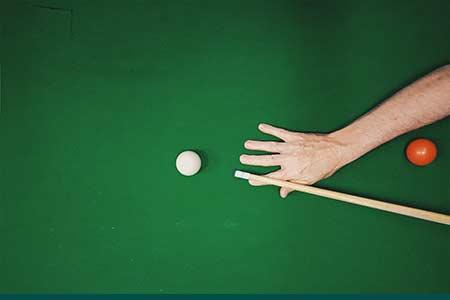 The 2019 World Championship saw the best players compete for a top prize of £500,000, and was watched by half a billion people around the globe, but it’s important to look back at where the game began almost 150 years ago.

Snooker is said to have been invented in 1875 by British Army lieutenant Neville Chamberlain in Jabalpur, India. According to author and essayist Compton MacKenzie in ‘The Billiard Player’ magazine of 1939, the game derived from experimenting on the officers’ mess table with ‘Black Pool’ featuring 15 red balls and a black.

Bringing Snooker into the Limelight

If it hadn’t been for Joe Davis, snooker today most likely wouldn’t exist. Like many initial players, he crossed over from Billiards.  Joe would go on to become an unrivalled contender for the title of greatest player, and with his driving force, he won 15 world titles in a row, the last being after World War Two.

He pioneered the first professional World Championship of 1927, today watched by hundreds of millions. This era of snooker belonged to one man only - the unquestionable Joe Davis of Derbyshire.

Joe Davis, the Grandfather of Snooker.

By 1955 Joe, now referred to as the ‘Grandfather of Snooker’, became the first man to have a 147 maximum break officially recognised in an exhibition against Willie Smith at Leicester Square Hall. However, Joe’s risky decision to retire led to a decade of decline before the sport was rescued by a medium which would herald a new dawn.

In July 1969, the BBC aired the first Pot Black tournament from Birmingham, which proved to be extraordinarily successful in helping to put snooker back into the public view. The BBC began looking to produce new programs in colour and managed to use this technology to the game’s advantage.

Steve Davis of Plumstead, a household name even today, had his first major success in the 1980 UK Championship where he won the world title. All over the UK, snooker clubs sprung up and created buzzing amateur scene breeding the stars of the future. Sponsors were lining up to invest in a sport which the British public obsessed over, with its vibrant cast of personalities, many who found their private lives the subject of unwanted attention.

Steve Davis retired in 2016 after 38 years of playing professionally.

Today, snooker stands as an international sport, played by more than 120 million people and with prizes up to £140 million. Many are excited to see snooker grow internationally, with talents in China and India rivalling British stars. At its rapid rate of growth, it’s even being considered for the 2024 Olympic Games.

If you are looking to have a professional snooker experience, browse through our selection of full-size snooker tables for sale. Additionally, enhance your gameplay with our professional-grade snooker cues, snooker balls and other snooker accessories.