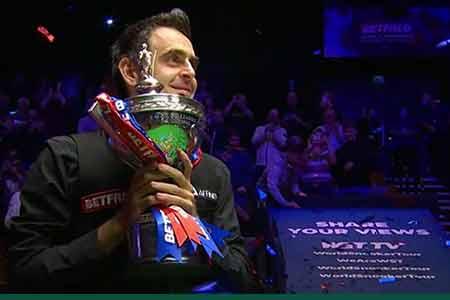 Even though Wilson fought back to 10-8, O’Sullivan completely dominated the rest of the match with a run of eight frames.

With this win, the 44-year-old took home the World Snooker Championship 2020 trophy, £500,000 in prize money and moved back to second in the world.

The Englishman was highly pleased with the win, making it his 37th ranking title, a new record surpassing Stephen Hendry’s 36 ranking titles.

He told BBC Two: “I never really think about titles. When I was a kid I never really dreamed I would be here. To be here and have all those victories is a dream that has become a reality.

“There was part of me that decided I didn’t play enough to justify winning a tournament of this stature which is an endurance test.

“I am not really an endurance type player because I don’t compete enough. I had half a chance but didn’t expect to win it.”

Wilson wasn’t too hard on himself and kept his head high after losing the match.

He said on BBC Sport: "I am 28-years-old. I am not going to beat myself up too much I am playing the greatest of all time. It was a dream come true knowing I was playing Ronnie in the final.

"You can’t respect him too much or he’ll walk right over me, which is what happened today. I have the two most important people to me sat right here.

"I am a fighter, I always will be. I really struggled in the first session and I just relaxed and let the shackles off. I’m just annoyed they would not let me play the whole match last night."

If you want to play like the professionals or get to O’Sullivan's level, we have available full-size snooker tables, snooker practice balls, high-quality snooker cues and more.