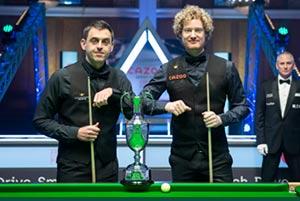 Neil Robertson claimed the Tour Championship title with a 10-4 win against Ronnie O’Sullivan at Celtic Manor.

The final proved to be a one-way game with Robertson hitting five century breaks and winning six consecutive frames whilst O’Sullivan was unable to take advantage of some of the openings that were handed to him and lost all six frames.

The Australian player didn’t only have his eyes on the Tour Championship title and the £150,000 cash prize. Robertson is hoping to regain the world title he won 11 years ago.

"If I'm going to compete at the World Championship, that's the sort of performance I'll have to put in," Robertson told ITV.

"I played really well all week and just tried to maintain the tempo of how I play in practice."

To learn how to play like the professionals, we recommend practice, practice and more practice. At Hamilton Billiards, we stock a wide variety of high-quality snooker cues and practice snooker balls to improve your gameplay.

O’Sullivan has now lost all finals he was part of this season – the Northern Ireland Open, Scottish Open, Welsh Open and Players Championship finals. However, world number two insists that he is still confident about his performance and results.

“If my game’s in good shape then I feel confident whether I’ve won tournaments or not.

“If I find a bit of form then you never know, but if this guy keeps playing the way he’s playing then I think he’ll probably be the man to beat.”

O’Sullivan also praised Robertson’s incredible performance, commenting how he could not compete with such a great player.

"I've never seen anyone play as well as that. His cue action is ridiculous. It was like he was playing on a pool table," said O'Sullivan.

"I can't compete with that. I just have to sit back and enjoy that amazing play."