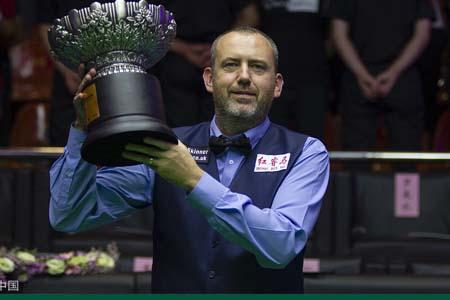 The career revival of veteran player Mark Williams has continued as he came out on top at the 2018 China Open. The Welshman came from 9-5 down to overcome David Gilbert in the final to clinch his 22nd ranking title and take home the winner’s cheque of £150,000.

If you’re looking to embark upon your own snooker journey, you will need to have the right equipment. Hamilton Billiards are the best and only choice when it comes to snooker tables for sale and snooker accessories for sale. Check out our snooker tables in stock right now where you will be able find some of the most bespoke designs available today.

This recent victory alongside his incredible triumph at last year’s World Snooker Championship has seen Williams overtake Ronnie O’Sullivan to second place in the pro rankings. His opponent Gilbert has now risen to 29th position after making his second appearance at a ranking final this year.

Having the right snooker cue has been a huge contributing factor in the recent rise for Mark Williams. If you’re looking to find the right style cue for your playing style, you will need to check out Hamilton Billiards’ range of 108 snooker cues for sale.

Amongst our stock, we have large sized models such as the 57” Three Quarter Jointed Swift Cue, as well as smaller designs like the 36” One Piece Peradon Ramin Cue. We have one of the most complete selections of snooker cues for sale on the market, enabling us to provide equipment for a number of established snooker clubs.

Williams claimed that his mental strength and determination were the key aspects for his win. He said: “To win three matches I have looked like losing is unbelievable. I never give up or let my head drop, no matter what the score is. I never let my opponent see that I'm losing heart, and then sometimes it does turn around. Whatever is going on, you have to stick in there.”

"I feel for David, he didn't have that many clear-cut chances. I played really well from 9-5 and put him under pressure. I won it more than he lost it. When I get home, I'll be straight to the caravan park, then I have to decide whether to have a drink to celebrate the World Championship win or a drink to celebrate this one. Or I might just double up and do both."

In recent months, Williams has overseen an extensive overhaul of the practice facilities he was using. A wide rafter of the furniture that was installed is on offer at Hamilton Billiards. We have everything you could possibly need to design and create the same snooker room used by the 2018 China Open Champion.

We have snooker chairs, snooker seating and tables for sale. If you’re looking to create something with a more traditional vibe, then you will need to check out our range of bespoke snooker furniture for sale.

It was a smooth ride for Williams for a majority of the tournament after dispatching both veteran and rookie players with ease. The most notable wins were comfortable 5-1 victories over Swiss player Alexander Ursenbacher and Englishman Joe Perry.

It wasn’t until the semi-final stage until the Welshman was truly tested as he was taken all the way by Thailand’s Noppon Saengkham. After going 5-2 down and with elimination imminent, Williams managed to reel off four straight frames to clinch an impressive comeback win.

Other than Williams’ victory, this year’s event will be noted for many of the world’s top players crashing out in the early stages. Many casualties took place in the second round as Ding Junhui, Judd Trump and Mark Selby were all surprisingly dispatched.

All the attention will now turn to the European Masters which takes place in Lommel, Belgium during October. Hamilton Billiards will be offering comprehensive coverage of the Snooker pro tour all throughout the 2018-2019 season.