Posted By Editor at Hamilton Billiards 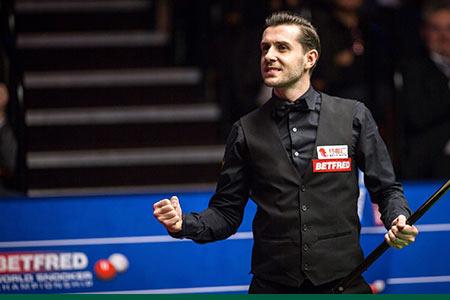 This impressive final saw Gould fight his way back to the match from 0-4 to 4-4 before the interval.

With one frame between the players in the second session, Gould took the match to a decider with a stunning break of 96.

As Gould sat down waiting for his turn, three-time world champion Selby made the match-winning break of 72.

Selby told Eurosport: I'm delighted. I thought it was a good final from start to finish and had I lost I'd have had no complaints.

"From being 4-0 down Martin played fantastically well to get back into the match and after that it was nip-and-tuck. It could have gone either way."

Gould, who almost retired at the end of last season after sharing with Eurosport his battle with depression, found his passion for snooker and couldn’t be happier to have reached the final of the European Masters.

"I'm pleased I've come here this week and competed with the best players in the world. I've had a rough time over the last couple of years and while gutted to lose 9-8 I've lost to a very good champion. There's an awful lot I can take from this." He said.

Play like the professionals today by purchasing one of our full-size snooker tables. At Hamilton Billiards, we stock a comprehensive collection of snooker tables and snooker accessories to make you feel one step closer to the pros.