Mark Allen is victorious in the Champion of Champions

Mark Allen is victorious in the Champion of Champions 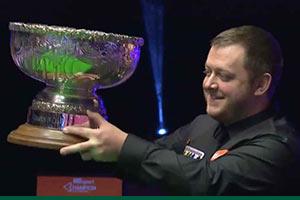 With eyes set on the trophy, Allen beat both world number 1 Judd Trump and world champion Ronnie O’Sullivan to reach the final, where he would play against the Neil Robertson, the same player who stood against him in the 2015 final of the Champion Champions and left triumphant.

However, this time Allen turned the tables. The Northern Irishman started out strong and established a lead of 5-4 after the first session.

Allen quickly continued his winning streak which moved him from 5-4 to lead 6-4 and 7-5.

Have your own snooker winning streak by practising with the right equipment. At Hamilton Billiards, we stock snooker training balls to help with positional shots and more, as well as high-quality snooker cues to enhance your game.

Robertson tried to reach Allen but the 2010 world champion only managed to get 7-6 before the mid-session interval.

However, Allen quickly destroyed any hope Robertson might have had. With fabulous breaks of 119, 70 and 105, the Northern Irishman claimed victory.

With this win, Mark Allen lifted the Champion of Champions’ trophy and took home a cash prize of £150,000.

“Beating the World No.1, 2 and 3 in succession to win a big tournament like this, it’s what we play for,” said Mark Allen. “A few splits here and there and that could have been a lot closer because Neil didn’t look like missing when he was in.

“My safety was pretty good all day and I feel like I played pretty well. Guys like Neil, Ronnie, Judd and Selby, they make winning look easy and it’s not. I work really, really hard on the practice table and if I can pick up a tournament or two every season or every other season, I feel like I am doing well because the standard is that good.”