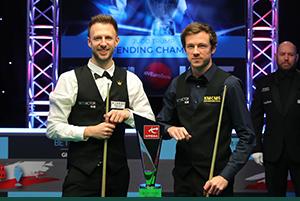 Judd Trump defeated Jack Lisowski 4-0 to claim the Gibraltar Open Title yet once again at the Marshall Arena.

Trump did not give Lisowski a chance during the final. The 31-year-old compiled breaks of 106, 70 and secured the title with a break of 94.

Having already secured the European Series bonus of £150,000 prior to the final of the event did not stop Judd Trump from having the eyes on the final prize. Wolrd number one also took home the Gibraltar Open trophy and the champion’s prize of £50,000.

Not only was this another Gibraltar Open win for Trump but it was also his fifth ranking title and the third time to defeat Lisowski in a final this season.

“I’m pretty happy with how I played throughout the tournament,” Trump said after the match

“I played really solid. I had a really tough game in the semi-final against Matt Selt. He was playing some brilliant stuff and I managed to steal a very big second frame.”

“I was solid again in the final against Jack. I know how good he is, so for me it’s about getting that quick start and putting him under pressure.

“He only really missed one ball in that game, and I just sort of capitalised on every single mistake.”

Do you want to train like the professionals? Be sure to invest in a high-quality full-size snooker table and snooker cues. For bespoke snooker tables, get in touch with our team today.