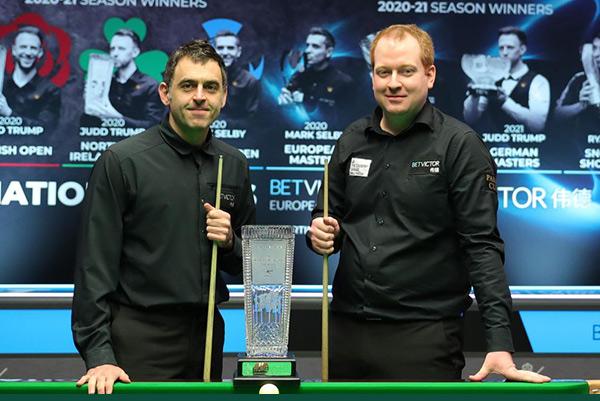 Brown was a 750-1 outsider coming into this tournament but quickly showed his true colours and snooker skills beating both Mark Selby and Stephen Maguire to reach the final.

The Northern Irishman started off strong with a 4-1 lead against O’Sullivan. However, the Rocket swiftly turned the tables and ended the first session 5-3 after potting two consecutive centuries.

The win was pointing towards O’Sullivan, who was leading 6-5, but this didn’t stop Brown, who regained his composure and took the lead at 7-6.

This closely fought final saw both players levelling each other back and forth. World number one levelled the game again until Brown was one frame away from the title.

O’Sullivan levelled at 8-8 with a 116 break but Brown took over and became the lowest-ranked player in 28 years to win a ranking title, and with this title, he also took home the Ray Reardon trophy and £70,000 prize.

Brown told the Guardian: “It feels unbelievable and it’s not going to sink in for a while. I have always believed in myself but I just never thought this would happen.

“I knew my game was good enough because whenever you’re in and scoring and taking your chances it doesn’t matter who is in the other chair. If I’d played Ronnie instead of the table I think I’d have got beaten today – he’s so good he can bully and steamroller you, so I just had to stick to my guns and do what I had to do.”

O’Sullivan had nothing but praise for Brown after the match.

“Listen, I’ve enjoyed every minute of that today,” said O’Sullivan. “I’ve had such a fantastic time. I love playing Jordan, he’s a great guy. I’m so happy for him.

“He’s a proper player. It’s fantastic for Jordan, it’s his night and you couldn’t be happier for him. It’s been great.” He told Eurosport.

Do you want to play like the professionals? Invest in a snooker table today. At Hamilton Billiards, we manufacture full-size snooker tables and renovate antique snooker tables. Contact our team today for more information.